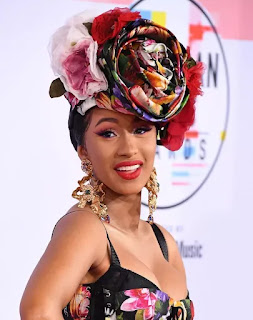 The five albums that were up for the best rap album award at the 2019 Grammys constituted a stacked category: Cardi B‘s Invasion of Privacy,Mac Miller‘s Swimming, Nipsey Hussle‘s Victory Lap, Pusha T‘s Daytona and Travis Scott‘s Astroworld. But Cardi B managed to nab the honor in the highly competitive category with her smash debut. When the award was announced, Cardi freaked and hugged Offset, grabbing him by the hand and guiding him up to the stage with her. “Babe I can’t breathe,” she said after taking the stage. “The nerves are so bad — maybe I need to start smoking weed.”
Cardi thanked her child with husband Offset. “I want to thank my daughter. I’m not just saying thank because she’s my daughter. When I found out I was pregnant, my album was not complete. I had three songs I was for sure having. And you know how I was. We had to have this album done so I could shoot these videos but I’m still not showing. It was very long nights.”
Cardi B becomes the first female solo artist to win the Best Rap Album in Grammy history.
By 🌟
Starmp3loaded

As the world deals with the global phenomenon that seems to be altering the social and economic life in every...

Moses Bliss – You I Live For

Moses Bliss returns with another soul lifting song titled ‘You I Live For’. You I Live For, re-echoes our faith...

Efe Nathan – Still Within The Flow

Efe Nathan releases Still Within The Flow – A song of worship that will definitely set your heart ablaze in...

This is Whole-Body-Response, Nobody sitting on this one, Put it on Repeat! Premium Gospel Fuji Artiste, Mike Abdul releases new...