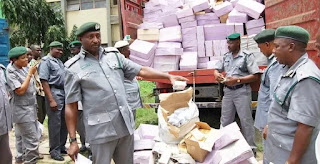 No fewer than five persons were feared killed and many injured in violent a clash between youths suspected to be rice smugglers and Customs officers in Gahoni community, Jibia Local Government of Katsina State.

Gahoni is a border town between Nigeria and Niger Republic where smuggling and other illegal acts take place.
The scenario, which occurred in the early hours of Thursday, left many vehicles damaged, forcing hundreds of All Progressives Congress (APC) supporters who were heading to Katsina to welcome President Muhammadu Buhari for the party’s mega rally to scamper for safety. THISDAY reported that the personnel of the Nigeria Customs Service, Katsina Command, were on a routine anti-smuggling patrol in an attempt to seize the nine vehicles loaded with “smuggled rice”.
It was learnt that the suspected smugglers, in a bid to resist the Customs officers from seizing their vehicles confronted the Customs personnel resulting in the death of the five of the smugglers. When contacted, the Customs spokesperson, Theophilus Duniya, said nobody was killed during the incidence but confirmed that two of his officers were injured by the smugglers, adding that there are receiving treatment at the command’s clinic.
According to him, “Nobody was killed during the incidence. In their normal reactions, if there was any case of death, they normally report or they used the case against the actions of the officers not minding the illegality and the criminality of victims involved.
“But unfortunately for us, two of our officers were injured by the smugglers. However, we intercepted 11 vehicles loaded with suspected rice and sugar.”
Meanwhile, the corpses of the deceased and the injured persons were said to have been taken to undisclosed hospitals in Jibia and Katsina Local Governments respectively.
By 🌟
Starmp3loaded